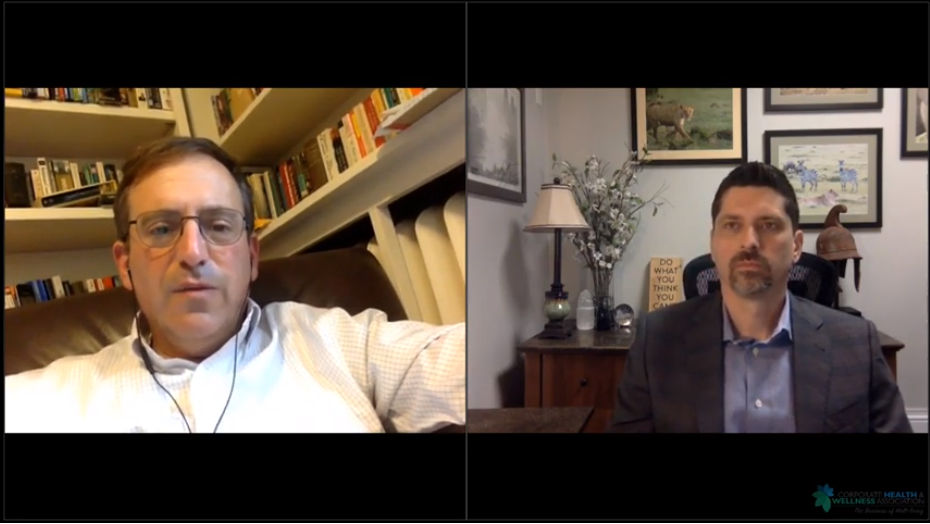 After One Expert’s Vision of the Virus Came to Pass, Many Americans are Adjusting to a New COVID Reality

Practice social distancing. Let your employees work from home. Wash your hands thoroughly. This won’t be an overnight affair.

Days before these were the new realities that the western world had to accept, they were the talking points of Marc Lipsitch, respected professor of epidemiology at the Harvard T.H. Chan School of Public Health. Lipsitch joined Jonathan Edelheit, President of Corporate Health & Wellness Association and Coronavirus Workforce Preparedness Training, on a webinar last month to share critical, early information about what COVID-19 is and how the general population should respond to it.

Lipsitch, an in-demand expert who has appeared in a number of prominent broadcasts and publications since the outbreak, immediately defined and emphasized the importance of the now-popular call to “flatten the curve.”

If you’re unfamiliar with the term, it’s a critically important concept for everyone to understand. While it’s unlikely that humans will be successful in completely halting the spread of the virus, individuals from virtually every corner of the world can help minimize the scope of the pandemic by taking certain precautionary steps. Whenever possible, healthy adults should avoid close contact with others and increase the frequency and effectiveness of basic hygiene actions, like hand-washing or responsible coughing.

Actions like these are unlikely to starve COVID-19 out completely, but they will help spread the rate of infection out over a far greater timeline. A slower escalation of the virus buys more time for experts to research and study the disease; perhaps more importantly, a slowed social progression can prevent national healthcare systems from being overwhelmed by hundreds of cases packing hospitals all at once.

“A flatter curve is more desirable because fewer people are infected and the peak is lower,” Lipsitch said.

To illustrate his point, Lipsitch referenced the well-documented case of how two different cities, Philadelphia and St. Louis, responded to the outbreak of influenza in 1918. Like other progressive cities, St. Louis implemented certain control measures (like social distancing) 102 years ago; consequently, it stretched its contagion exposure out over three months, never excessively strained its medical infrastructure, and generally prevented its city from falling into the worst of a massive epidemic event.

Philadelphia, on the other hand, refused to cancel a citywide war bond parade at the end of September. Three weeks later, the city was in the clutches of a serious medical emergency, with an abnormal death rate that spiked 350 percent higher than St. Louis’ worst day.

At this time, it’s still unclear how long precautionary methods like social distancing will be important. Lipsitch does tell us, however, that the United States has been on a trajectory that’s relatively similar to other hotspots in Italy and China.

“We are, perhaps, a week and a half away from the same situation as Italy,” Lipsitch said. “So this is why there’s a sense of urgency to really try to reduce transmission as much as possible, to at least try not to get to the point of crisis that northern Italy has been in.”

Beyond recommendations for viral defense strategies – many of which have since been implemented – one of the key takeaways from Lipsitch’s analysis is that the number of cases, both in the US and across the world, is dramatically underreported.

At the time of the webinar, the US had about 1,000 confirmed cases, but Lipsitch believed the actual number of illnesses to be approximately 50 times higher than the number of reported cases. If that 50:1 relationship remained accurate today, the US would have roughly 18 million total cases, or roughly 5.5 percent of the entire US population.

“Based on the science, as much as possible, I think fifty-fold is a pretty good guess at where we are,” Lipsitch said. “I think we’re missing at least 9 out of 10, and maybe 49 out of 50.”

The month of March has been a dramatic one for the United States. At the end of February, the US was operating normally, with confirmed COVID-19 cases limited to only one or two known hotspots mainly centered near the west coast. There were fewer than 100 cases nationwide.

In the five weeks since, the fabric of US society has radically shifted toward one that completely orbits around the realities of the novel coronavirus. Wealthy Americans have escaped to secluded second homes or vacation spots, so much so that the towns themselves are asking them to stay away. A large portion of the middle class has been told to work from home indefinitely, whenever possible, to minimize the spread of the virus.

Blue collar workers and point-of-contact employees – those individuals whose jobs are often deemed essential to continued economic operation – are some of the last remaining people who are consistently outside, in the public space.

Not everyone has a job that neatly translates to a work from home format. But for those that do, Lipsitch believes that the transition from the office and empowerment of both sick and healthy employees to stay home (in their beds or offices, respectively) has been a crucial development.

The Road to Recovery

As COVID-19 has evolved to a ubiquitous health crisis, both in the US and across the world, it has received a massive amount of media attention. But while US news organizations often report on the pandemic from a national perspective, there is less emphasis on what is happening in individual cities or regions.

As the virus approaches a US peak, which could happen as soon as the next few weeks, local statuses may become more relevant than national averages.

According to some “rough numbers” referenced by Lipsitch, somewhere between 20 and 60 percent of Americans will contract novel coronavirus by the time this public health crisis is over, with roughly 1 in 200 of those adults dying. But those distributions will be nowhere close to geographically even.

“Based on the way that epidemics spread, it’s quite likely that the burden is different in different places,” Lipsitch said. “It may be 10 times bigger, per capita, in one place than in another. But I do think it’s in many, many places.”

The virus continues to prove Lipsitch right, as COVID-19 has infected, or threatened to infect, every community in the United States. For many Americans, time has slowed to a crawl, as they remain trapped inside their home, or working regularly in a quiet, eerie public space.

“Though many Americans will hopefully be able to avoid becoming infected by taking the necessary aggressive precautions, including social distancing, almost every American will pay the toll of the economic burden this virus has brought,” Edelheit. “Given our experience working with employers, we recognize the threat this poses to businesses in every sector, and this is precisely the reason why we’ve moved quickly to create a training program for employers to cope with the inevitable.”

It’s hard to predict how long life on Earth will be shaped by coronavirus. But whether the pandemic begins to fade next month or next year, Lipsitch’s advice on containment and prevention will continue to be essential guidance for mindful communities.

You can watch the original webinar between Marc Lipsitch and Jonathan Edelheit here.

You can find more information on Coronavirus Preparedness here.

by
Morgan C. Wang
at