By
Jeff Gero
,
at 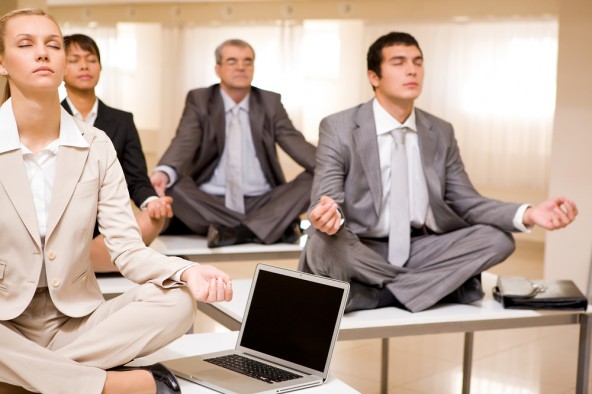 By
Jeff Gero
,
at

No one seems to really say what meditation is. They do say what it does. I don't believe that a meditator would get the same great benefits, which meditation offers, if they sit and think about their problems. It becomes our challenge to sustain our focus on the object of concentration. So let's define meditation as the consistent flow of focused mental energy, whether it's on a mantra, following your breath, or focusing on a candle flame.

Sometimes I find it very difficult to focus and it seems like the object of meditation is my distraction and my thoughts are my meditation. That is the opposite objective of meditation. Let's call this obstructive thinking. My ability to concentrate sometimes depends on my state of mind. In a calm mood I am more successful.

When I am stressed out, it's very difficult to turn my mind from thinking, solving problems or just worrying. The mind has the job of thinking, which it does very well. Meditation practice gives us the opportunity to train our mind so we don't get caught up in obstructive thoughts. Every time a thought arises we observe it and then bring our awareness back to the object of meditation.

By observing our mind meditation helps us to understand our emotions and reactions to situations and thoughts. Through self-awareness which is the ability to become aware of our thoughts, emotions and reactions, we become objective. We allow thoughts to pass rather than unconsciously get caught up in them. This ultimately will help us to become less reactive and more proactive in situations and become more effective leaders.

Beliefs create thoughts, thoughts create feelings and feelings create actions. Thoughts are bursts of electrical energy moving around on neural pathways in the brain. And generally, the pathways they move on are pretty well defined fixed beliefs. As these beliefs become stronger, they create a habit, an attitude that can govern us the rest of our lives.

That habitual attitude becomes part of our personality and identity. Because this is mostly unconscious, we are not aware of it. One habitual attitude I have is "slow traffic stresses me." I realize it's not the traffic that is really stressing me, but my belief that I have to be in control. I need to get somewhere on time and I can't. I really need to accept the situation.

Scientists now say that the brain is malleable which means we can restructure it, based on our perception and experience. We can create new neural pathways in the brain that allow us to totally change our attitude toward life, behavior and our perception of our self and of others. Everyone knows that meditation reduces stress. With the aid of advanced brain scanning technology, researchers are beginning to show that meditation directly affects the function and structure of the brain, changing it in ways that appear to increase attention span, sharpen focus and improve memory.

All great attributes for today's hard working leaders. One recent study found evidence that the daily practice of meditation thickened the parts of the brain's cerebral cortex responsible for decision making, attention and memory. Sara Lazar, a research scientist at Massachusetts General Hospital, presented preliminary results, which showed that the gray matter of 20 men and women who meditated for just 40 minutes a day was thicker than that of people who did not.

The grey matter includes regions of the brain involved in muscle control, sensory perception such as seeing and hearing, memory, emotions, and speech. Unlike in previous studies focusing on Buddhist monks, the subjects were Boston area workers practicing a Western-style of meditation called mindfulness or insight meditation. Researchers at Harvard, Yale, and the Massachusetts Institute of Technology also found that meditation actually alters the physical structure of the brain.

According to Time magazine, 10 million people meditate daily in the U.S. Now business schools are also teaching aspiring MBAs meditation techniques, as well. A handful of executive MBA programs around the country from Harvard to Michigan's Ross School of Business to the Drucker School of Management are teaching students to meditate. It's not necessarily about teaching spirituality, but focus and attention.

There's no way to quantify whether learning how to be centered during a stressful business meeting is balancing the bottom lines at companies. But students say slowing down does help them be more effective and resilient. Since emotional intelligence is a person's ability to perceive, evaluate and control their emotions, I believe meditation enhances the individual's EI ability. In other words, it is the ability to step back from a situation, look at it objectively and respond to it without an automatic, preconditioned, negative emotional reaction.

Meditation is also known for providing its practitioners with superior mental and emotional health. It rids our minds of subconscious layers of anger, depression, anxiety, fear, phobias, and sadness, and produces a perfect mental and emotional balance. Added benefits of meditation from a Harvard study include, a more positive attitude, less anxiety, less ego involvement, more present and stronger ethics.

People who meditate are known to have more friends, maintain healthier relationships, and feel a great deal more satisfied and content with their lives. In India, managers aren't as shy about combining management and meditation. Meditation is, in fact, seen as an essential part of leadership. Apoorva Lochan, director of the recruitment and training firm Cerebral Solutions in New Delhi, meditates daily for 90 minutes, something he believes everybody should do.

Meditation makes him less reactive and gives him a broader perspective, Lochan says. "I don't let myself get as crazy from stress or negative results. I am more patient with my employees, but also with my children at home. Cutting back on meditation in times of stress is about the dumbest thing you can do. I am convinced that meditation is one of the best investments an organization's leader can make."

How managers deal with stress and tension is determined by an organization's culture. If a manager leads by example and regularly creates an atmosphere where meditation, peace of mind and objectivity are acceptable, it will have a direct effect on employees. It is best if the managers and leaders also meditate with employees. At one company where I was teaching meditation, I asked the partners to join the meditation group. One partner did, occasionally.

The other partner said, "Isn't it enough that I support meditation by paying for it?" Stronger support will bring better results. Meditation is "becoming an acceptable practice and more necessary than ever before in our history. One hundred years ago there were no jet planes, hardly any automobiles, certainly no cell phones, Blackberry's, computers, internet, or fax machines.

More than 80 percent of the world's technological inventions have occurred since 1900. There was more information produced in the 30 years from 1965-1995 than was produced in the entire 5,000-year period from 300 B.C. to 1965 A.D. We have experienced more change in the past 20 years than the world encountered in the previous 2,000 years. Never before in our history have our lives changed so rapidly and the stress increased so fast.

We coined new stress terms like; "gone postal," "road rage," "desk rage" and the newest one, "techno stress". Meditation's role in stress reduction is crucial for companies, too, since stress-related absenteeism is a big cost to business. Researchers from the American Institute of Stress estimated that stress costs businesses in the U.S. $300 million a year due sick days and lost productivity The advantages of meditation for business are clear.

In 2008, the University of Wisconsin reported meditation not only improved concentration, but fostered feelings of friendliness and empathy. In 1988, Bengt Gustavsson at the University of Stockholm proved it enhanced the cooperation and communication of management teams.R.W. "Buck" Montgomery is a long-time believer in the business benefits of meditation.

He instituted regular meditation sessions at his Detroit chemical manufacturing firm in 1983. Within three years, 52 of the company's workers, from upper management to production line employees, were meditating 20 minutes before they came to work and 20 minutes in the afternoon on company time. Within three years, absenteeism fell by 85 percent, productivity rose by 120 percent, injuries dropped by 70 percent, sick days fell by 16 percent - and profits soared by 520 percent.

"People enjoyed their work; they were more creative and more productive" as a result of the meditation breaks, Montgomery says. "I tell companies, 'If you do this, you'll get a return on your investment in one year.' It has been my experience that meditators make much better leaders than stressed out, and aggressive ones.

They understand their reactions to stressful situations and understand their impact on others. They are far better at inspiring and motivating employees to take on greater responsibilities, having greater self confidence and at aligning them around common missions and values. They lead by example and employees don't even feel like they are being led because they feel empowered and confident.
‍

Dr. Jeffery Gero is a pioneer in the field of stress management and the creator of the Success of Stress System. For over 30 years, Dr. Gero has worked with many organizations and individuals dealing with a variety of stressors. He delivered the first stress management program for the California Department of Corrections at San Quentin Prison.

He assisted the Los Angeles Times with the stress surrounding the 1984 Olympics and helped JPL (NASA) deal with the stress after the failure of the Mars Project. Several of his clients include General Motors, Sheraton Hotels, Dept. of the Army, Xerox, Amgen and Dole.

Dr. Gero coaches athletes and individuals to enhance their performance. He is also former director of the Health Awareness Institute and the Stress Management Institute of California. Dr Gero can be reached at 818 879-1373

by
Victor Tringali
at

by
Johnette van Eeden
at

by
Philip Kaufman
at