Is Sitting in Your Office Really That Bad?

By
Deborah Read
,
at 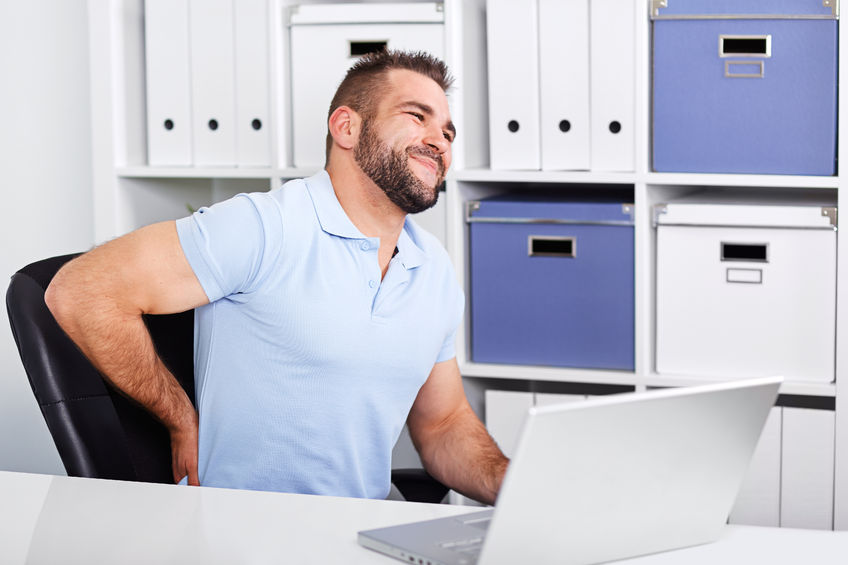 By
Deborah Read
,
at

What is YOUR total sedentary time on an average workday? Sedentary time includes sitting, reclining, and lying down outside of your nighttime/bedtime sleep, so this includes breakfast, commute, work, lunch, commute, dinner, and evening activities. Go ahead, add it up and learn what your total is! It is likely that your total over the course of a typical workday will range between 6-12 hours, as I have discovered in numerous presentations I have given to trade associations.

The research on the effects of sedentary time, which began in earnest with Mark Hamilton1 at the Pennington Biomedical Research Center in the 1990's, and others[i], have found that the danger threshold seems to be six or more hours per day of sedentary time. Let me lay out the cumulative effects for you, according to a variety of research studies:

The Other Side of the Coin

In the 1990's researchers Dr. Levine and Dr. Jensen of the Mayo Clinic were trying to understand why some people seem to gain weight while others don't. They designed an extremely clever study where they controlled caloric intake and monitored physical movement. Exercise was prohibited. They ultimately learned that the people who gained weight sat 2 hours more per day than the people who maintained their weight, no matter if the participants were on the normal diet or the over-feeding diet.

It was a huge breakthrough! They re-tested in other countries and consistently found that thinner and healthier people -as well as those who live longer - basically just move more throughout the day! Thousands of minor movements will keep the fat off! Being sedentary will put it on. For example, they found that obese subjects were sedentary an average of about 10 hours daily, while Jamaican farm workers who were thin and healthy were sedentary only an average of about 5 hours daily.
‍

Some people who've heard bits and pieces of media information about the dangers of sitting concluded that the answer must be for their employees to stand. So they went about raising employee desks and suddenly having people stand all day. Simply standing is not enough. In fact, standing a whole shift has many detrimental effects. It causes blood to pool in the legs (contributing to varicose veins) and a high degree of discomfort in the feet, legs, and low back. It also makes the heart work harder, which may be good for some and not for others.
‍

The researcher work outlined above has lead to the understanding that the key recommendation is for employees to move more! This is where sit and stand workstations come into play. A sit/stand workstation is one that alternates between sitting and standing positions. Because you're objective is many thousands of movements throughout the day (e.g. 5,000 like the Jamaican farmers), each time you switch between sitting and standing, you're getting closer to that goal!

In addition, you'll need to encourage your employees to walk during lunch, take walking meetings, walk to a co-workers desk to ask a question instead of emailing them, taking the stairs, and pacing while talking on the phone. Exercise has dramatic health benefits for the brain, muscles, bones, and heart -- but will not make up for sedentary time.
‍

There are many methods for achieving a sit/stand workstation. Research has shown that employees prefer adjustable workstations over stationary ones, they have improved comfort and mood, they perform better, and have less pain and fewer injuries. Designing and installing sit/stand workstations is not as straightforward and simple as you might think. There are numerous employee, furniture, and facility considerations.

Be sure to have a third party professional ergonomics consultant work with your architect, interior designer, or furniture vendor. While the ideal scenario is that every employee has an electric or spring-adjusted desk, this may be beyond a company's budget. And, be sure to inquire about the height range, as they vary and you want to be sure to accommodate the heights of employees you need to accommodate. The next best solution is an after-market sit-on-top unit.

These units are simple to deploy, more affordable than electric or spring-adjusted full desks, and can work well for many employees. Most have a fixed monitor distance, don't drop the keyboard below the work surface, and don't have built-in tablet/phone/notebook/document holders. Most units are very heavy and/or awkward to move up and down, particularly for women, due to weight and awkward arm and wrist postures as well as hand force required.

The Fellowes Lotus has found a way to design both a lower weight and well-positioned hand controls to make the adjustments, making it safer for women to adjust. It also has a built-in tablet/phone/notebook/document holder which is very convenient. The next best approach is to have a fixed standing height desk with an elevated ergonomic stool that has an industrial height footrest. These types of chairs have several inherent safety risks, however.And the worst approach is to have separate keyboard trays and monitor arms that claim they are "sit to stand".

Most do not have the height range required for employees outside the middle of the stature bell curve. And, this approach requires two pieces of equipment to be adjusted each time which creates a nuisance barrier for employees and may aggravate an employee's low back when repeatedly reaching out to lift or lower the monitors.
‍

The most recent consensus statement, published in the British Journal of Sports Medicine in 20159, [xi]recommends "for those occupations which are predominantly desk based, workers should aim to initially progress towards accumulating 2 hours per day of standing and light activity (light walking) during working hours, eventually progressing to a total accumulation of 4 hours per day (prorated to part-time hours).

To achieve this, seated-based work should be regularly broken up with standing-based work, the use of sit-stand desks, or the taking of short active standing breaks."Neuhaus et al (2014)[xii] found in a randomized controlled trial with height-adjustable workstations that there was a three-fold improvement of the use of sit/stand workstations in the standing position if professional education was provided.
‍

There have been some studies that point to a positive return on investment for sit/stand workstation investment. United Parcel Service (1994)[xiii] found call center employees who alternated between sitting and standing had 62 percent reduced musculoskeletal discomfort. We all know that when we have discomfort, we take more breaks.Dainoff (2002)[xiv] found that those who stood more took shorter breaks.

Non-standers took an average of 47 percent more breaks and each break was 56 percent longer than the standers group. Kay (2011)[xv] found in a 3-year 6,200 employee study that non-adjustable workstations had 20 times the worker's compensation costs compared to user-adjustable workstations. Garrett (2016)[xvi] found that call center employees had a 46 percent increase in productivity when they had sit/stand adjustability compared to traditional seated desks.

The research has yet to show if the predictions of lower health care costs will come to bear. However, it seems to certainly be an excellent addition to an overall wellness program. It likely goes a long way toward retaining Millennial employees too.
‍

P.O.P! Change your Perspective in the Workplace

by
Jared Yellin
at

Me and the COO: Fitness as a Fiduciary Responsibility

by
Vik Khanna
at

Making Nutritious and Delicious Food: The True Meaning of Wellness

by
Sequioa Cheney
at