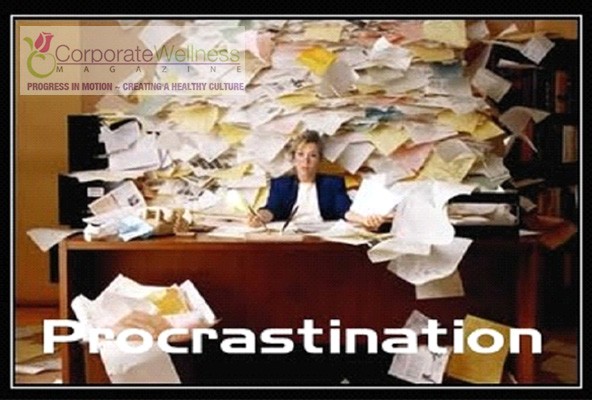 Do you repeatedly procrastinate? Do you wonder why you don't just get on with it? If procrastination is a "gap between intention and action" what keeps you from putting your intention into action? You're in good company since virtually everyone procrastinates. But not everyone is a procrastinator.

Those reporting they procrastinate swelled from only 5 percent in 1978 to 20 to 25 percent today based on two recent large studies by psychologist Joseph Ferrari of DePaul University. Procrastination is impulsivity winning out over future rewards. This is probably why it's on the increase. Our modern world has limitless distractions: a plethora of TV channels, electronic games and Internet temptations.

Referring to all of these amusements, University of Calgary psychologist Piers Steel speaking of procrastination says, "You couldn't design a worse working environment if you tried." Historically, it was said procrastination was caused by perfectionism, fear of failure, and rebellion against overbearing parents that one has never outgrown. Then there were the thrill seekers who profess they work best under pressure and use procrastination to create that pressure. Steel reviewed 553 studies of procrastination and concluded it has four related variables regarding your task:

He suggests about the task:

He created a formula to predict your procrastination likelihood:

Survival Instincts May Be Cause of Procrastination

Impulsivity, he says, is the most important part of his equation. "There's a huge correlation between procrastination and impulsivity that has to do with evolution. Procrastination reflects the difficulty of coping with some aspects of modern society with hunter-gatherer brains because our forebears lived in a world without delay.

For them meat kept for three days and danger lurked around every corner. It was a very immediate environment. We learned to value the now much more than the later to survive."Without going into the details about the functioning of our survival brain, he says we do less well planning for the future, where goals exist. "So, a second piece of chocolate cake wins out over a trim figure down the road."
‍

In spite of our survival brains contributing to procrastination by living more in the moment to survive versus the future where goals reside, you can overcome your delaying habits. Timothy A. Pychyl, procrastination researcher at Ottawa's Carlton University suggests the following. Use his ideas in sequence since each follows on the previous one.

a.    On undesirable tasks

b.    When you're uncertain how to proceed

Along with making your task concrete (tip #1) you need to reduce the uncertainty about how to proceed. Planning is very important for movement. When it's time to act you'll also need to reduce distractions. Stop checking email, seek privacy as much as possible, and create an environment that supports your willpower and focus.
‍

4.    Cultivate your willpower: Much recent research shows that willpower is like a muscle. You can extinguish it more quickly than you might imagine. When you do, a very negative consequence is losing some ability to control your behavior. To strengthen your resolve and stay on task:
‍

a.    Identify a positive value that's relevant to your task at hand. Values are wonderfully motivating. If you value independence you won't want to depend upon anyone in retirement. Putting away more savings now would honor this value and strengthen your willpower.
‍

b.    Mindfulness: Awareness is the first step in self-control, so keeping focused attention on your retirement savings goal will help you procrastinate less by strengthening self-regulation.
‍

Other Ideas to Get You Going

Overcome "yes-but" and the procrastination it causes

To successfully procrastinate use the sure-fire "yes-but" technique: "Yes, I know that I need to get that done, but not now." It typically works wonderfully. "I'd love to apply for that job, but I'm probably not qualified." The "yes" indicates your interest in the job. The "but" is your excuse for not applying.Are you a yes-buter? Dr. Arthur Freeman and Rose DeWolf, authors of The 10 Dumbest Mistakes Smart People Make, say a common reason you may procrastinate in uncomfortable situations is because you have a low tolerance for frustration.

Since frustration is a fact of life you'll need to tolerate disagreeable circumstances better if you expect to overcome this very effective stalling practice. Acknowledging the unpleasantness of your task can help. But don't go overboard. If you exaggerate how distasteful the job is you'll be right back into "yes-but." Instead, consciously acknowledge the due date of your commitment and at minimum create a plan of action as described below.

To move forward change your "yes-but" to "yes-and." Instead of, "I'd love to apply for that job, but I doubt I'm qualified", say, "I'd love to apply for that job and I need to find out about the requirements." "Yes-but" gives you excuses. "Yes-and" shows you the steps you'll need to take."Delay is the deadliest form of denial," C. Northcote Parkinson said. So when you hear yourself use the "yes-but" as an excuse for procrastination immediately do the following:

o    Get the contact information for the organization for which you want to work.
‍

o    Find out the qualifications.
‍

o    If you meet them, fill out an application.
‍

o    Follow up with a phone call to the employer.

If you're unwilling to follow through with these steps, decrease your stress by admitting to yourself that you have no intention of looking into this job. Honesty requires being conscious of your choices. "I choose not to pursue this job because I assume I'm not qualified." Staying conscious increases the likelihood that one day you'll make a different choice. Perhaps you'll even pursue a job you fear you're not qualified for by throwing caution to the wind and researching whether or not you are.

Get out of the procrastination mode and instead focus on a starting point. Each time you hear yourself say "yes-but" stop and instead say "yes-and" to see what the implied required steps are so you can start your action plan. Often, overcoming procrastination is simply taking that first step.
‍

"Never put off till tomorrow, what you can do the day after tomorrow."-- Mark Twain

Seriously, procrastination is a frustrating habit. Since it's a learned one it can be overcome but only if you become conscious when you're doing it. If you're a chronic procrastinator you need to acknowledge when you say "later" you really don't mean it. Thousands of "laters" create thousands of opportunities lost. To stay conscious, when you say "later" follow up with, "Later to me means never."

Do I really want to get this done or not?Also become very cognizant of your avoidance habits, which you've probably perfected to the point that you engage in them automatically and unconsciously whenever you face an unpleasant task. Keep a journal of your thoughts and emotions when you're delaying:

To get going try these ideas:

Ultimately you must put your energy where your goals are. If you don't attain them, make your goals smaller and easier to attain expanding them as you progress. Putting off the less pleasant for the more immediate and more attractive is very normal. We all do it sometimes. But for chronic procrastinators remember the most important thing to do is just start!

"The journey of 1000 miles begins with a single step." --- Mao Tse-tung Move toward your goal by taking one step at a time. So what are you waiting for? Get going!
‍

In 1976, after returning from 2 years in the Peace Corps in Colombia, South America, Jackie earned her Master's degree in Community Counseling/Psychology from her home state of Minnesota. She then worked for several years as a Program Director at a mental health center. In 1982 she founded InterAction Associates, her speaking and coaching firm.For over 25 years Jackie has designed and presented keynotes and workshops on stress management, diversity, workplace harassment, motivation, and communication skills.

Her mission is to inspire you to live a conscious life of personal responsibility in your relations with yourself and others, which she weaves into every presentation to help you "wake up" to your responsibility in making your desired changes. Literally hundreds-of-thousands of people throughout North America, the United Kingdom, Australia and points in between have benefitted from her programs.Jackie is also a Stress & Wellness Coach helping people achieve more success with less stress.

by
Andrew D. Greenberg
at

The Implications of Acetaminophen Overdose for Injured Workers