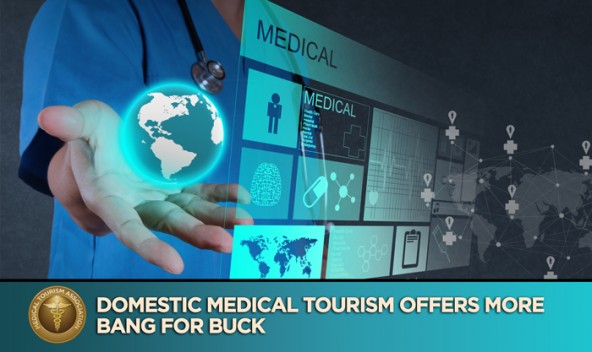 Employers shopping for the best bargains for their healthcare dollars may soon make domestic travel for medical procedures and treatments as American as apple pie. Taking a cue from medical tourism, which offers affordable care around the globe, U.S. employers are finding sweet deals for their workers and dependents within the nation's borders to offset the bitter costs of healthcare in their neighborhood communities.

From hip and knee replacements to cardiac bypasses, employers are looking at domestic medical tourism to map out ways to manage their benefits costs with avenues that provide employees with access to attractive rates and quality care.

Up until recently, medical tourism had been limited to travel overseas, where Americans were referred to international destinations for less-expensive care that didn't compromise competence. In the end, workers were happy with their procedures and treatments and the employers and insurance companies that financed the care enjoyed their cost-savings.
‍

But, now, flying halfway around the world - to, say, Thailand or Costa Rica -- may not always be necessary to save money. At the prospect of losing patients to foreign markets, hospitals at home have begun to match prices. The Medical Tourism Association, which supports awareness initiatives through educational and certification programs and partnership and networking opportunities, has been urging employers interested in controlling healthcare costs and improving outcomes to also consider domestic travel.

Employers are catching on, realizing they can reduce costs by 20 percent to 40 percent - more than enough to cover travel expenses - by persuading their employees to think twice about traveling to locations that may be no more than a five-hour drive away. When Wyoming resident John McNally needed knee-replacement surgery, his place of employment, Alpha Coal West, offered to pay his travel expenses if he would undergo the procedure in Fort Collins, Colo.

The hospital had offered a far better price, but was a five-hour drive from his home in Gillette. Despite a few bumps in the road along the way, the employee was so pleased with his choice and operation that he decided to return to Fort Collins to have his other knee done a few months later.
‍

For some patients who might consider a flight across the pond for medical treatment to be out of their comfort zone, the choice for domestic care is easier. But, because the savings can be so profound, employers have been actually willing to sweeten the pot for their employees by offering incentives including no-out-of-pockets costs, money for travel expenses and services that make trip arrangements.
‍

Employees are taking the bait. Medical bills can completely overwhelm a family when illness strikes. In fact, escalating medical bills are expected to push 1.7 million households into bankruptcy this year, making health expenses the single biggest cause of default filings, outpacing credit-card debt or unpaid mortgages.

What's more, even health insurance doesn't buffer consumers against financial ruin. The nation's $2.6 trillion healthcare system, 10 times the $256 billion spent in 1980, has come on the backs of families, which have seen insurance premiums grow by 97 percent in their employer-sponsored coverage programs.

Elise O'Keefe was faced with a $5,400 expense for a total hip replacement, despite coverage under her husband's health policy. After her husband overheard a coworker discuss domestic medical tourism, they couple traveled from their home in Las Vegas to Newport Beach, Calif., where O'Keefe was implanted with an artificial hip - at no out-of-pocket cost - from a surgeon who had performed thousands of similar procedures.
‍

Domestic medical tourism is one way for both employers and their covered workers and dependents to bend the cost curve. Hospital care accounts for more than one-third of the nation's healthcare spending tab. Employers with domestic travel programs save money by negotiating a single rate with hospitals, which includes fees for surgeons, anesthesiologists and all medical care up until a patient is discharged.

By negotiating bundled payment options with a network of providers including hospitals, doctors, insurance companies and others, healthcare management facilitators like Nueterra Global Alliance can help employers keep costs down for patients willing to travel for treatment.

Since launching last year, the Kansas-based company has added seven providers to its network including Methodist Hospital for Surgery, in Addison, Tex., and Houston Physician's Hospital. Through partnerships and joint equity agreements with healthcare providers, Nueterra business initiatives - and the employers and patients they service - are typically not in Kansas anymore.
‍

About 58 percent of all employees with health coverage in the United States are in self-insured plans. These employers will typically buy catastrophic health insurance for employees and then pay out individual claims. It's a way to realize cost-savings for these employers who spend a great deal of time reinforcing wellness programs or encouraging preventative health measures for employees.

Lowe's Companies, with locations in the United States, Canada and Mexico, was one of the first to take advantage of domestic medical tourism. The mainstream home improvement retailer, with 114,000 employees enrolled in a health insurance plan, partnered with the Cleveland Clinic to provide a coverage option that would shift cardiac surgeries from a community facility to a hospital renowned for its quality care.

The rational paid off in fewer complications and an increase in successful outcomes, employees returning to work sooner instead of back to the doctor and overall lower costs for patients and employer alike. Other large self-funding companies including WalMart, The Boeing Co., PepsiCo. and HCR ManorCare have followed suit.

Although these and other outfits are just getting the gist of domestic medical tourism, they believe the price is right for these programs. Domestic tourism is also moving beyond complex procedure and organ transplants to offer relatively minor treatments, all in the name of targeting the best bang for the healthcare buck.

by
Jeralyn Glass
at

by
Alan Forray
at