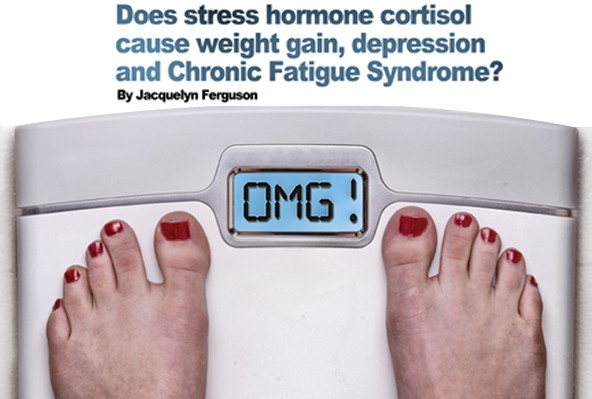 As you probably know by now, cortisol is a fight or flight hormone that is released every time you're stressed by anything. Part of its purpose is to replenish your energy after exerting yourself through fighting or fleeing your perceived threat. Primitive humans certainly needed this energy boost after physically battling a wild animal, for example.

But generally, we modern humans respond mentally to stress, like worrying, not physically fighting or fleeing. And herein lies much of our health problems.Unlike our ancestors whose stressors had a more definitive beginning and ending (hunting and defending) today we have more continuous stress (traffic, work deadlines, kids' schedules).

We release cortisol into our systems far too often throughout the typical day with little break from our stress. Whether or not your stressor requires you to physically respond, cortisol is released, saturating your blood and tissues.

For many people cortisol courses through their bodies near constantly, never shutting down and dangerously affecting their bodies. Chronically elevated cortisol makes you vulnerable to developing higher blood pressure, diabetes, lowered immunity, and weight gain to name just a few disorders.
‍

We Americans, always looking for the quick fix for whatever ails us, search endlessly for weight-loss products.  My advice--don't hold your breath, at least not yet. Here's the theory of the connection between weight gain and the cortisol released into your system from stress.

Stress hormones, including adrenaline, which gives you instant energy, along with corticotrophin releasing hormone (CRH) and cortisol, provide the biochemical energy you need to fight or flee from your stressors. High levels of adrenaline and CRH decrease appetite at first and for a short time.

Cortisol helps replenish your body after the stress has passed, and lasts longer in your system. The problem, according to Sean Talbot, Ph.D., associate professor with the University of Utah's Department of Nutrition and the author of the "Cortisol Connection," is that, "too often today's response to stress is to sit and stew in our frustration and anger, without expending any of the calories that we would if we were physically fighting our way out of a wild animal hunt (as our ancestors did)."

Your neuroendocrine system doesn't know that you're not physically fighting or fleeing, so it still responds to stress with the hormonal signal to replenish nutritional stores making you feel hungry. This can lead to weight gain and a tendency to store "visceral fat" around the midsection.

To complicate matters, the "fuel" your muscles need during the fight or flight response is sugar, a reason you crave carbohydrates when stressed, says endocrinologist Ricardo Perfetti, M.D., Ph.D., of Cedars Sinai Medical Center in Los Angeles.

"To move the sugar from our blood to our muscles requires insulin, the hormone that opens the gates to the cells and lets the sugar in," says Perfetti, who directs the outpatient diabetes program. And high levels of sugar and insulin set the stage for the body to store fat. "So people who are under stress, metabolically speaking, will gain weight for that very reason." (Can this at least in part explain the obesity epidemic in America?)

But according to Mayo Clinic dietitian, Jennifer Nelson, R. D., and physician Dr. Berge Kenneth, there is no reliable evidence that cortisol blockers such as CortiSlim, CortiStress, and Cortistat lead to weight loss. The manufacturers of these products tell you that stress creates high levels of cortisol in your system causing you to accumulate excess fat.

Ms. Nelson says what they don't tell you is this occurs only when your body produces large amounts of cortisol due to side effects of medication or an underlying medical condition like Cushing's syndrome. There's no evidence that the amount of cortisol produced by a healthy person under stress is enough to cause weight gain.

Another unresolved research question is whether elevated cortisol causes fat to deposit in your abdominal area. Some research shows that abdominal fat causes specific chemical changes that can lead to lower metabolism and cravings for sweets, possibly leading to even more weight gain.

This can also lead to higher cholesterol and blood sugar levels and elevated blood pressure, all factors for heart disease especially when combine with less exercise. I normally don't include research I cannot credit but the following research is so compelling I'll make an exception.

There was a fascinating PBS special featuring Dr. Robert Sapolsky of Stanford University, a renowned stress response researcher, and a female researcher whose name I Googled and could not find. (The recording was lost when we switched from TIVO to DVR)

The female researcher, like Sapolsky, researches the effects of the stress response by studying wild primates in Africa. Her research focuses on status as a stress factor. She showed the lowest status apes, the most stressed in other words, with rolls of fat on their bellies.

These are wild animals! Her research tips the scales for me in favor of stress causing abdominal weight gain. Officially, however, the research on the role of cortisol in obesity is still speculative. Blaming your weight gain on stress neglects the fact that you may have developed a habit of eating in response to stress, which is a learned habit, encouraged by brain chemistry.
‍

Limit lifestyle weight gain by dealing with your stress

Given that the research jury is still out on whether high levels of cortisol actually cause weight gain, the minimum that seems to be true is that since the role of cortisol during stress is to provide your body with energy, it can cause an increase in appetite. In other words, stress might lead you to eat more."

During the first couple of days following a stressful event, cortisol is giving you a cue to eat high-carbohydrate foods," says Dr. Perfetti. "Once you comply, you quickly learn a behavioral response that you can feel almost destined to repeat anytime you feel stressed."

Whether your eating is driven by stress hormones, by habits or a combination of both, research shows that there are ways to interrupt the cycle and stop the weight gain. Notice how the advice is the same as it is for living a healthier lifestyle.

If you're experiencing chronic stress don't go on a strict diet, though. Canadian researchers found that severely limiting calorie intake can kick off a series of biochemical events that ultimately increase stress and can make you feel hungrier.

Here's the bottom line about weight loss. It always has been the bottom line, which suggests it always will be --- until a miracle weight loss treatment is invented. There are two ways to lose weight, eat fewer (and better) calories and burn more of those calories by moving your body more. It's truly that simple.
‍

Does elevated cortisol also contribute to depression and chronic fatigue syndrome (CFS)? To answer this let's consider the theories of Drs. George Chrousos, Chief of the Pediatric and Reproductive Endocrinology Branch at the National Institute of Child Health and Human Development, and Philip Gold, of the Clinical Neuroendocrinology Branch at the National Institute of Mental Health.

They explain the hormonal system known as the hypothalamus - pituitary adrenal (HPA) axis, a complex series of events that takes place when you're stressed. It affects a variety of stress-related conditions including depression and CFS.

The HPA axis is a feedback loop where the brain signals the release of hormones needed for the fight or flight response, affecting your

According to Dr. Chrousos, the HPA axis varies person to person and is probably influenced by heredity. In most people it functions well, appropriately responding to a threat and switching off when the threat is over. Others however under- or over-react.

With major stressors in early childhood, the HPA axis feedback loop becomes stronger with each new stressful experience. By adulthood this can produce an extremely sensitive stress circuit where the person overreacts hormonally to comparatively minor situations.

It's largely accepted that chronic stress and its released cortisol are related to depression. Cortisol is produced in excess in depressed people and has a toxic effect on the hippocampus. Chrousos finds that people with depression can turn on the fight or flight response, but can't turn it off again, producing constant anxiety and overreaction to stimulation.

This can be followed by "learned helplessness," where they give up trying to improve. Some neuroscientists believe that the major changes in serotonin and other neurotransmitters seen in depression are not the cause of depression, but secondary to changes in the stress response.

Chronic fatigue syndrome is also generally accepted as a stress-related disease and a dysfunction of the HPA axis but with lower levels of cortisol; even though people with difficulty sleeping had higher cortisol levels in the evening. Practicing regular deep relaxation helps lower the cortisol to enhance sleep.

Dr. Chrousos concludes that chronic stress shouldn't be taken lightly or accepted as a fact of life. "Persistent, unremitting stress leads to a variety of serious health problems. Anyone who suffers from chronic stress needs take steps to alleviate it by learning to relax and calm down."

To minimize your own mounting physical problems consider that stress management can be as important as any medication you take. Employers who want to control health-care and workers' comp costs provide support for your employees to manage their stress better; the sooner the better for your mental and physical health.
‍

Jacquelyn Ferguson, M.S. In 1976, after returning from 2 years in the Peace Corps in Colombia, South America, Jackie earned her Master's degree in Community Counseling/Psychology from her home state of Minnesota. She then worked for several years as a Program Director at a mental health center.

In 1982 she founded InterAction Associates, her speaking and coaching firm. For over 25 years Jackie has designed and presented keynotes and workshops on stress management, diversity, workplace harassment, motivation, and communication skills.

Her mission is to inspire you to live a conscious life of personal responsibility in your relations with yourself and others, which she weaves into every presentation to help you "wake up" to your responsibility in making your desired changes. Literally hundreds-of-thousands of people throughout North America, the United Kingdom, Australia and points in between have benefitted from her programs.

The Cost of Stress on Everyday Lives

by
Jesse Curry
at

Corporate Wellness and Digital Awareness: Defending the Most Vital Information

by
Randy Reaney
at