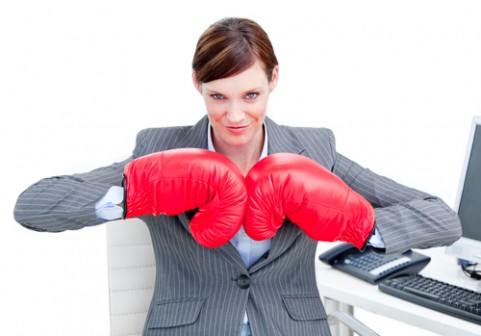 Since stress is the perception of insufficient control and assertiveness increases personal control, being assertive is one of the best ways to lower stress. It puts you in the driver's seat of your own life.

Conversely, being passive decreases your control and puts others in the driver's seat of your life. While aggressive people attempt to control too much and pay the consequences later: they win the battle but ultimately lose the war.As a review from last month's article, here are the four communication styles from which you can choose no matter the situation.  They exist along a continuum with each style honoring different parties' rights therefore producing different outcomes:

When assertive you accept that others' rights are as important to them as yours are to you. When rights collide you're willing to negotiate to ensure everyone gets their most important needs met and their rights respected, which is easier said than done.
‍

It's important to pick and choose your battles since not all are worth fighting; like whether or not to speak up during political conversations. It's certainly possible to carry on respectful political dialogue; it's just difficult with some people.

It's also wise for those who are especially passive to begin asserting themselves in situations and with people who represent the least threat. Practice using the following skills in less stressful situations first. Then as your self-confidence increases you can handle more challenging situations with greater skill.  Save the most threatening people and situations for later, after you've been successful in easier situations.

Do you often regret speaking before you think? To avoid this, consciously identify your goal before speaking, particularly in difficult situations. Your goal basically outlines what you want to say. Be careful, however, to state your goal in a way that's within your control. If your goal requires someone else to change it's beyond your control.

You'll definitely increase your batting average, however.In the political discussion example, determine if it's worth it to you to counter with your own opinions by identifying your goal.  Let your goal guide you.If your objective is to present an opposing belief, then jump in. To do this assertively you must respect the others' rights to believe as they do. Listening well communicates this respect. If your intent is to convince the other person how wrong he is and how right you are, good luck.
‍

Assertive techniques, which are mostly formulas, are great because:- they force you to think before you speak. They may be clumsy at first but once you become proficient they become effortless to use.- they are problem-solving and goal-oriented in nature. If it takes you two minutes to create an assertive message using these formulas then you need to think that long before you speak.

You've learned before that "you" messages encourage others' defensiveness, which discourages cooperation. Avoiding the blaming "you" message is vital, so let's take a look at this lesson again. No matter how mature and sophisticated a person is, you can see them flinch when someone hurls a "you" message at them.

Virtually everyone gets defensive when on the receiving end of "you" messages.

The more difficult your message the more diligently you need to eliminate "you" messages and substitute with "I" messages.

This skill is a direct statement of what you want, which right you want to defend, or which belief or opinion you want to communicate using the "I" message:

This great three step formula helps you say almost anything to almost anyone:

For example, you have out-of-town-family whose visits are too long. You've said nothing for fear of hurting their feelings. But if it's important enough to you, honor your right to set limits rather than allow their rights to be more important than yours. You could say,

Being assertive is more than stating what you want. You must also be respectful of the other party's rights and needs. After you present the above request your family may feel offended. Listen carefully to their response. Then, paraphrase what you heard:

Your response: "It seems you feel I'm rejecting you."

"We enjoy your visits. We just want to protect our time and energy, too. Would keeping it to a week be too uncomfortable for you?"

"That wasn't my intent. I'd like for us all to be happy with your visits."

You can feel like you're walking on thin ice when you ask someone to change a behavior. So it's even more important to think before you speak. Use this three-step formula:

For example, you gave an employee several messages to call a customer. The customer has not yet been called and is getting upset. Explain to your employee the importance of returning customer calls.

Do you react defensively to others who trigger your hot buttons? For this reason, fogging is my favorite skill.The intent of Fogging is to take the wind out of someone's sails. Use it when someone is unjustifiably criticizing you or attempting to emotionally hook you.Fogging means agreeing with everything they say (although you're not really agreeing).

Your response: "Yeah, it is messy."
‍

Obviously, if your boss said, "Your report was lousy," you shouldn't Fog by responding, "Yes, it really was bad." Fogging is useful only to take the wind out of someone's sails who deserves it.

Saying "no" is especially difficult for passive people who want to please others, avoid hurting their feelings, appear to be cooperative, etc. If saying "no" is very difficult for you, revisit last month's article on seeing your own rights as important to you as others' are to them.
‍

Use this four-step approach to set appropriate limits:

After saying "no" if the person requesting tries to talk you into a "yes,"

Paraphrase each attempt to get you to say "yes" then say "no" again:

Your response: "Thanks, I'm really flattered and I'm going to say "no."

"I'm sure there will be interesting people.  I'll be too busy to serve."

Exposing manipulation to the light of day decreases the likelihood the manipulative person will use it again with you. Shine the light with these ideas:

You could respond, "I get the feeling I'm being manipulated. What's going on?"

Your co-worker says, "You're not a team player."
‍

Your response: "Whether or not I'm a team player is not the issue. The issue is will I work this weekend and the answer is "no."
‍

Once you expose his manipulation be prepared for his response. Use the listening skills to let him know you heard and understood before responding assertively back. Assertive formulas help you think before you speak.

At first they require a minute or more to think through but the results of successfully asserting yourself are definitely worth the learning and risking. Consistent assertive behavior puts you in the driver's seat of your own life while improving your relationships.
‍

Jaquelyn Ferguson is the founder of InterAction Associates, her speaking and coaching firm. For over 25 years Jackie has designed and presented keynotes and workshops on stress management, diversity, workplace harassment, motivation, and communication skills. Jackie is also a Stress & Wellness Coach helping people achieve more success with less stress. Jackie is the author of "Let Your Body Win:  Stress Management Plain & Simple" and a weekly column "Stress for Success" in Gannett Newspaper, at www.letyourbodywin.com.

Sleep and Weight, It's a Symbiotic Relationship

by
Danielle Keenan
at

by
Mike Pitts
at