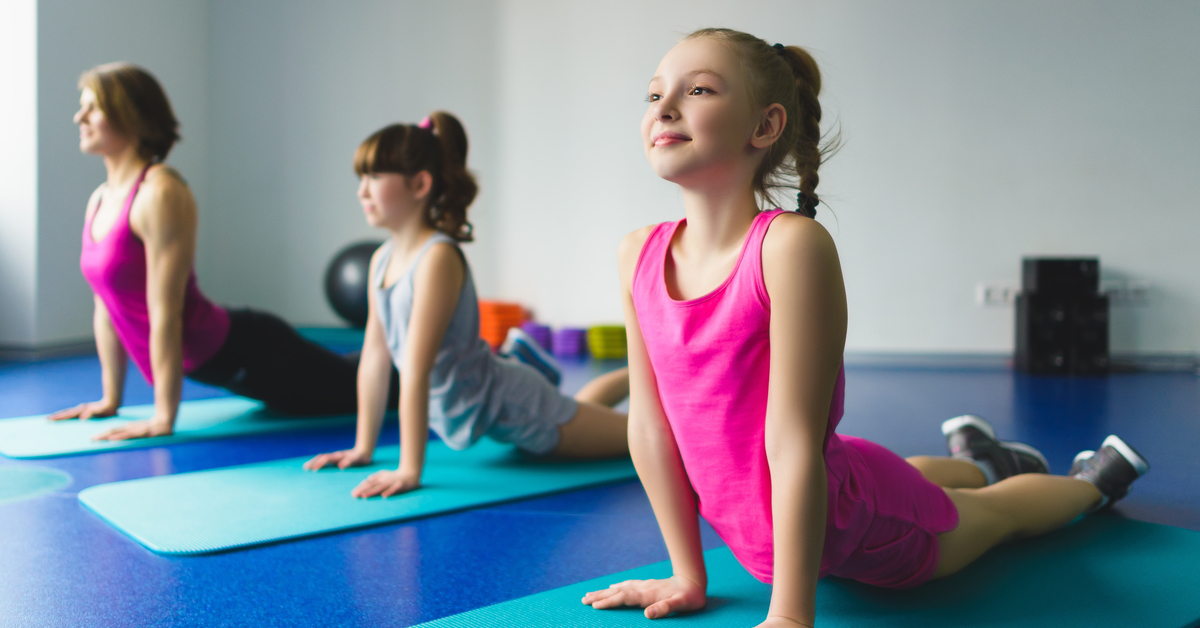 In Palm Beach Gardens, Florida, one elementary school is paving the way for the future of health and wellness in school districts across the nation. Allamanda Elementary School is pioneering programs to improve the lives of students and families – programs that include yoga balls to replace chairs in the classroom, stationary bikes in the library, an outdoor “loop” track, and healthy vending machines – just to name a few. Next on the list is a putting green course and a tennis court, according to Deborah Feinsinger, the Health & Wellness Choice Program Coordinator.
‍

Ms. Feinsinger set out on a quest five years ago. She went to the school’s Principal, Marilu Garcia, with the idea to start a running club. One year prior, Feinsinger began to run regularly. “The feeling I received when I crossed the finish line was the most amazing feeling. It’s like euphoria. I accomplished something. I set my goal, and I reached that goal. And then, getting that medal was like no other feeling I’ve ever had,” said Feinsinger.
‍

Given Florida’s heat, especially in the beginning of the school year, Principal Garcia was a bit skeptical as to whether or not any children would want to participate in an outdoor running club – if it were even safe, at that. She did, however, agree to give it a shot.
‍

It all began with Walk Now for Autism Speaks, an annual family event in downtown West Palm Beach. Principal Garcia was at the finish line when her students, student families, and staff members came across the finish line.  Principal Garcia witnessed the fierce look of determination on the faces of many of her students. The feeling of a shared sense of accomplishment for Garcia when her students received their medals was so compelling that she was driven to do something more.
‍

Principal Garcia put together a proposal and took it to the Palm Beach County School District. The proposal was to make Allamanda a Choice School in Health & Wellness. The county’s Choice Programs were conceived with the intent to create a diverse plethora of specialty schools in the region. Palm Beach County has hundreds of Choice Program Schools.
‍

Allamanda became the first elementary school in the county to become a Health & Wellness Choice School. It is one of only a few grade schools in the county to have a wellness program embedded into its curriculum.
‍

Allamanda is the north area school site for students with autism, so it’s no surprise that the inception of the Health and Wellness Program started with the Walk for Autism.  Allamanda is nationally recognized for its dedication to autism. With 160 students out of 720 diagnosed as being on the autism spectrum, Allamanda is intensely committed to making a difference by its allegiance to special needs.
‍

The Centers for Disease Control and Prevention (CDC) announces that about 1 in 68 children are diagnosed with autism spectrum disorder (ASD). Autism is a developmental disorder characterized by troubles with social interaction and communication, and by restricted and repetitive behavior. Learning can be a challenge for students with autism.
‍

Allamanda has 16 dedicated classrooms for students with autism, with no more than 10 children in each class. Children receive the individualized attention necessary for learning and development in the grade school years that are so critical. Outside of the classroom, these students have the opportunity to intermingle with the rest of the students, especially in wellness-related school activities. Many of these students participate in Feinsinger’s Running Club, which takes part in community 5k races.
‍

“When you look at our running club, it doesn’t matter which students are part of the general curriculum or students that are part of our ASD program; the Running Club is all-inclusive,” says Feinsinger. Additionally, these students participate in the tennis club, golf club, and a number of other after-school wellness-related programs. “They’re fully integrated into our programs,” Feinsinger added.
‍

Allamanda’s programs are so immensely successful that they receive frequent calls from parents across the country who would like to have their children be part of the school. These parents will move from places like New York just to have their child educated by such extraordinary staff and to have health and wellness integrated into their child’s education.
‍

The staff is committed to their job, according to Feinsinger. The teachers rarely leave to work elsewhere. Principal Garcia has been at Allamanda Elementary School for 18 years. For them, to say the school is special is an understatement. Not only is the school devoted to health and wellness, but it is also one-of-a-kind. Being an organization which is nationally recognized for its innovative commitment to wellness, the school provides a learning experience for both teachers and students. The teachers say that it’s a “school within a school”.
‍

Every year, Feinsinger looks to reinvent the wellness program. It can be challenging to attain the funding needed to implement revolutionary ideas that revolve around a concept never-before-seen. Wellness in the workplace, or corporate wellness, is no longer a foreign phrase. However, wellness in the classroom is relatively new.
‍

Feinsinger applied for a grant to the Quantum Foundation and created a $30,000 opportunity for the school to add one more piece to its wellness program: desk cycles. Every classroom received at least two to four desk cycles as a part of what they coined Allamanda Healthyville. These are essentially mini-stationary bikes; some have been placed in front of computers, others under traditional desks.
‍

This has had a remarkable impact on attention spans “One teacher said she had a student that could sit and read for only 10 minutes. Now, that student reads for 40 minutes straight,” says Feinsinger. By moving their bodies and minds in synchronicity, the impact on learning is improved. Principal Garcia added that Allamanda is an A-rated school, which means that the children score high on standardized tests.
‍

Feinsinger also introduced 15 standing desks in several classrooms. Each standing desk has what is called a “fidget bar”– a moving footrest to soothe the children who love to fiddle around at their desks. A study done by Texas A&M University found that people who used standing desks were 45% more productive compared to their seated counterparts, which could make one wonder about the future of traditional chairs in both the workplace and the classroom.
‍

The school has implemented what they call “flexible seating” throughout the campus.
‍

Yoga balls have replaced traditional chairs for students who have chosen to make the switch. The school’s wellness program and all that it entails is always optional – the children make the choice to participate. Exercise ball chairs or yoga balls force one to constantly make slight adjustments to balance and stability, resulting in more attention to posture and improved core strength.
‍

Aside from the physical components, Allamanda also focuses on nutrition, implementing Try-Day Friday, where students are given the chance to try different vegetables. The school encourages healthy snacks, like fruit on a skewer, rather than sugary treats, for birthday and other celebrations. Allamanda has a cooking club, where students learn about healthier ways to prepare food.
‍

International Kids’ Yoga Day was Friday, April 6, 2018. Corporate Health & Wellness Association (managed by Global Healthcare Resources) was invited to join the school for the event, which included 70% of the school’s participation. Stephanie Dorr, Director of Kidding Around Yoga of South Florida and a partner of the school, came in to host an incredible yoga session which we had the pleasure of live streaming to our Facebook page.
‍

Not only did we have the opportunity to participate in yoga, but we also toured the amazing facility which more than 720 lucky students are a part of.
‍

We witnessed classrooms that were in the middle of instructional dance sessions, spoke with students about goal-setting relative to wellness, and participated in a bit of stationary cycling ourselves. We were blown away when fourth grader, Mariana, shared her hypothesis that after she practiced yoga during International Kids’ Yoga Day - she believed she would be more focused during the rest of her school days. Mariana sets personal intentions for her day and how she would feel after she achieved her goals.
‍

Sienna, another fourth grader at Allamanda, shared her love for the stationary cycling bike because she felt it was gratifying to be able to add exercise to the classroom experience.  Both Sienna and Mariana said that many kids have issues with being fidgety and restless in the classroom and they have personally witnessed their classmates becoming more focused and more engaged in classroom discussions.
‍

One teacher described how one of her students uses the standing desk with the fidget bar to take all of his math exams. Before having these desks, the student could not finish his exam within the same timeframe that the other children could. Now he is finishing his exam before many of his classmates.
‍

Allamanda Elementary School is quite literally giving rise to the next generation of wellness champions. Feinsinger has spearheaded a wellness initiative which could very well inspire schools around the nation, if not the globe, to take a step back from the monotony of curriculum and investigate the possibility of installing their very own wellness programs.


While we know from statistics that wellness programs in corporations make employees more present, productive, and have fewer absences, we can be sure that incorporating health and wellness in the classroom will do the same for students. The student case studies have shown that this is in fact the case; and with children being the future of every generation, incorporating healthy behaviors at a very young age can make for a lifetime of healthy habits.

by
Miriam Moras
at
Broccoli People