A Roadmap to Changing Eating Patterns in Accordance with Dietary Guidelines 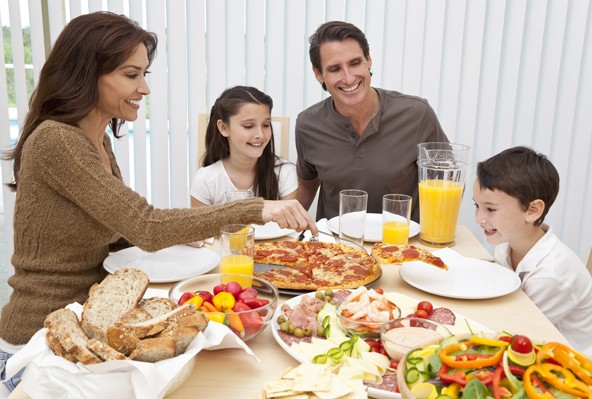 Poor diet and physical inactivity can lead to many chronic diseases, such as cancer, diabetes, hypertension, osteoporosis, obesity and cardiovascular disease. According to the Centers for Disease Control and Prevention, nearly 1 in 2 adults lives with at least one chronic disease condition and 75 percent of the U.S. healthcare costs are due to chronic conditions.

They are widely prevalent in the United States of America and worldwide. In the US, approximately 41 percent of population will be diagnosed with cancer during their lifetime. Dietary factors are associated with many types of cancer, such as breast, endometrial, colon, kidney, mouth, pharynx, larynx, and esophagus. Nearly 24 million people, ages 20 and above, suffer from diabetes, mostly type 2, which is heavily influenced by poor diet and physical inactivity.

One in three or 74.4 million people have hypertension, which is a major risk factor for heart disease, stroke, congestive heart failure and kidney disease. Many dietary factors contribute to high blood pressure. Half of the women and 25% of men, ages 50 and above, will have an osteoporosis-related fracture in their lifetime. Sixty-eight percent of American adults are overweight or obese, including 34 % who are obese.

Nearly 17% of children are obese in this country. About 37 percent of the US population or more than 81 million Americans have cardiovascular disease. Its major risk factors include high level of blood cholesterol and other lipids, type 2 diabetes, hypertension, metabolic syndrome, excess body weight, physical inactivity and smoking. Sixteen percent of Americans have high level of blood cholesterol. Several dietary factors have been associated with the development of cardiovascular disease and hypertension.

Eating a proper diet and performing regular physical activity can help people achieve and maintain a healthy weight, reduce the risk of chronic disease, and promote their overall health. The Federal government regularly issues guidelines on diet, healthy eating patterns, and physical activity. The Dietary Guidelines for Americans have been released jointly by the United States Department of Agriculture (USDA) and the Department of Health and Human Services (HHS) since 1980 and are revised every 5 years, as mandated by the Congress.

The 2010 Dietary Guidelines were released jointly by Agriculture Secretary, Tom Vilsack, and Health and Human Services Secretary, Kathleen Sebelius, on January 31, 2011. They are based on the comprehensive scientific report of a 13- member Dietary Guidelines Advisory Committee composed of renowned nutrition and health researchers and scientists from the major universities of the nation that are nominated to serve through a public process.

This Committee operates externally from Federal purview.  For 20 months during 2008 to 2010, the Committee reviewed and analyzed the most current scientific information on diet and health and incorporated it into an evidence-based report after considering testimony of experts and public comments. The Committee was aided by USDA's Nutrition Evidence Library staff, which under the direction of the Committee, performed a thorough systematic review of scientific literature.

The Committee weighed and graded the quality of the research literature and the preponderance of evidence on which to base its conclusions to some 135 questions posed by the Committee members. The Advisory Committee submitted a 445-page advisory report to the Secretaries of USDA and HHS in June 2010. The work of the Committee as well as the evidence it reviewed are available at www.dietaryguidelines.gov and www.nutritionevidencelibrary.gov.

Based on this report, the USDA led, with HHS assistance, the preparation and issuance of the Federal policy known as the 2010 Dietary Guidelines for Americans. This is  a 95 page document that translates the Committee's work into plain language that is intended to be used by nutrition educators, health professionals (e.g., dieticians), and policymakers in developing and conducting nutrition guidance, promotion, and outreach programs, including Federal nutrition assistance and education programs.

The 2010 Dietary Guidelines recommendations are intended for Americans ages 2 years and older, including those at increased risk of chronic disease. This seventh edition of the Guidelines is being released at a time of rising concern about the health of American population. Poor diet and physical inactivity have been shown to be the most important factors contributing to an epidemic of overweight and obesity affecting men, women and children in all segments of the American society.

These factors are equally contributing to the increasing trends for diet-related illnesses. Thus, the importance of the Dietary Guidelines as the centerpiece for Federal nutrition policy and programs has never been greater. The intent of the Dietary Guidelines is to summarize and synthesize knowledge about foods and individual nutrients and food components into an interrelated set of recommendations for healthy eating that can be adopted by the public.

Taken together, this dietary guidance and nutrition information can help Americans choose a healthy, nutritionally adequate diet that is balanced with adequate exercise. The 2010 Dietary Guidelines contain 23 recommendations for the general population and six for specific subpopulations, e.g., pregnant women and older adults.

The key recommendations of the 2010 Dietary Guidelines call for managing calories consumed with calories expended to manage body weight, thereby preventing or reducing the prevalence of overweight or obesity. For people who are overweight or obese, the Guidelines recommend consuming fewer calories from food and drinks and reducing time spent in sedentary behavior.

Other highlights of the Guidelines include a recommendation for sodium, most of which comes from salt in the diet. On average, Americans are consuming about 3400 mg of sodium daily.  For the general population, the recommendation is to reduce daily sodium intake to less than 2,300 milligrams and further reduce intake to 1500 mg among persons who are 51 and older and those of any age who are African American or have hypertension, diabetes, or chronic kidney disease.

Excessive intake of sodium has been shown to cause increased blood pressure (hypertension), heart disease and stroke. The risk of these conditions increases with age and people 51 and older have a high incidence of hypertension. Similarly, African Americans, diabetics, and those with chronic kidney disease, of all ages, are more sensitive to the blood-pressure-raising effects of sodium. The 1500 mg recommendation applies to about half of the U.S. population, including children, and the majority of adults.

To move the US population toward eating more foods with greater amount of nutrients for the amount of calories they contain, the Dietary Guidelines also emphasizes the need for increased consumption of vegetables, especially dark green, red and orange vegetables, and fruits. The majority of fruits should come from whole fruits, including fresh, canned, frozen or dried form rather than from juice because of the benefits of the fiber whole fruit contains.

Consumption of vegetables and fruits is associated with reduced risk of many chronic diseases, such as cardiovascular, including heart attack and stroke. Some vegetables and fruits may be protective against certain types of cancer. The new Guidelines also emphasize that, to move Americans to healthier eating patterns, Americans need to reduce their consumption of foods that have significant amount of calories from added sugars and solid fats, typically found in products, such as grain-based desserts like cookies and cakes.

Today, in a typical 2000 calorie diet, instead of limiting these calories to about a healthy 260, Americans are consuming about 600-800 calories from added sugars and solid fats, which provide little, if any, nutritional benefits. Of great concern is that about 7% of Americans' added sugar calories are from sugar-sweetened drinks alone. Because Americans are not consuming enough whole grains and are over consuming refined grains, which do not fully contain the benefits of dietary fiber, the Guidelines recommend consuming less of refined grains and more of whole grains that include the grain seed, usually called the kernel.

On the average, Americans are consuming 11 percent of their calories from saturated fat. The recommendation is that consumers need to reduce saturated fat intake to no more than ten percent of their calories to reduce the risk of coronary vascular and other chronic diet-related diseases. Therefore, the recommendations call for switching from higher-fat dairy foods to increased intake of fat-free or low fat (1%) milk and milk products, yogurt and cheese.

Total calories from saturated fats should be limited by replacing them with monounsaturated and poly-unsaturated fatty acids and using more oils (e.g., canola and safflower oils) than fats that are solid at room temperature (e.g., butter and stick margarine).In the newly named 'protein foods' group (previously termed 'meat and beans'), for the first time, the Guidelines recommend consuming an increased amount of seafood.

Currently, the intake of seafood in the US is estimated to be 3.5 ounces per week. It should be increased to 8 to 12 ounces of a variety of types of seafood per week. For the majority of Americans, the benefits of the omega fatty acids in seafood on reducing risks of heart disease outweigh previous concerns about methyl mercury, an environmental contaminant.

For pregnant women, the fatty acids in seafood have been shown to benefit fetal development, except that for women who are pregnant or breastfeeding, the recommendation is to limit it to 6 ounces for white tuna and to not eat tilefish, shark, swordfish, and king mackerel. Besides seafood, other sources to fulfill the recommendation for consuming a variety of protein are lean meat and poultry, eggs, beans and peas, soy products, and unsalted nuts and seeds.

It is associated with lower risk of cardiovascular disease and reduced risk of all-cause mortality among middle aged and older adults and may help to keep cognitive functions intact with advancing age. However, it is not recommended that anyone begin drinking or drinking more frequently on the basis of potential health benefits because moderate alcohol intake is also associated with increased risk of breast cancer, violence, drowning and injuries from falls and motor vehicle crashes.

The Dietary Guidelines are a roadmap to improved diet and lifestyle. The Guidelines establish recommendations for building eating and physical activity patterns that are focused on consuming fewer calories, making informed food choices, and being physically active can help people attain and maintain a healthy weight, reduce their risk of chronic disease, and promote overall health.

By following the roadmap, science shows that all Americans can live a healthier life. A wealth of information for health professionals about the Dietary Guidelines is available at www.dietaryguidelines.gov. USDA's award-winning tools and resources to implement the Guidelines are at www.MyPyramid.gov.

Dr. Rajen Anand serves as the Executive Director, USDA's Center for Nutrition Policy and Promotion in President Obama's Administration (July 2009-current). He previously served in the Clinton Administration 1995-2001 in the same position. Previously, he was a Professor and Chairman of the Department at the California State University, Long Beach.
‍

Dr. Robert Post is the Deputy Director of USDA's Center for Nutrition Policy and Promotion. He has 30 years of experience in food and agriculture public policy, food production, nutritional science, food marketing, and public health communications and education. Previously, he headed the USDA food policy program in the Food Safety and Inspection Service.

The 411 on Flu in the Workplace

9 Innovations that Suggest the Healthcare Revolution is Here

by
Joanne Criss
at